No other book has delivered such rich, unique, complex, and entertaining characters!

The Lies of Locke Lamora offers an utterly original premise: a group of thieves (calling themselves the “Gentlemen Bastards”) plan to scam one of the richest men in their city. Essentially, they are con artists that have been trained by an old priest (Father Chains) to scam, steal, cheat, and swindle—all in service to the Crooked Warden, the Nameless Thirteenth god of the world. 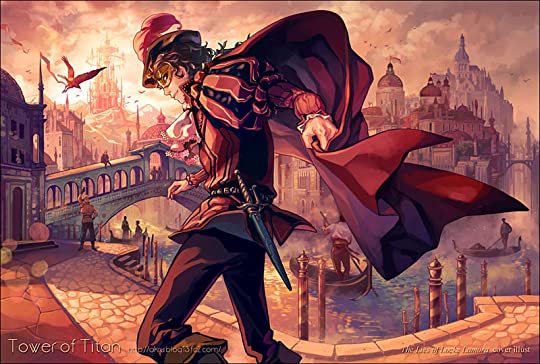 Locke Lamora is the leader and mastermind, with Jean Tannen as his right hand man and heavy muscle (one hell of a bad-ass fighter!). In addition to Locke’s biting wit and Jean’s straight-edged humor, there are the two light-hearted, ever-mocking Carlo and Galdo, two identical twins who serve as “jacks of all trades” or fixers for whatever the con requires. Finally, there’s Bug, the youngest, an apprentice studying the art of swindling from the Gentlemen Bastards.

The book takes place entirely in Camorr, a Venice-like city of skyscraping towers, bridge-spanned rivers and waterways, and the sort of crime, corruption, and greed one would expect from a Machiavelli-era Italy. So much of the world-building is absolutely breathtaking:

For me, it’s the characters themselves that stand out—I’ve yet to find a fantasy novel that offers such intriguing people, with complex, humorous, well-developed personalities that kept me addicted from the very first page.

Locke is not your typical hero—swindler, thief, liar, cheat, and con artist, yet he has an innate nobility and desire to be heroic that drives him. Jean Tannen is his best friend, guardian, and conscience, yet he has his own complex personality issues that keep him grounded and fully relatable (especially for a big guy like me). Carlo, Galdo, and Bug are less-developed, but they bring such clever humor and wit that you can’t help liking them. All the other characters—the evil Bondsmagi and the Grey King, the cruel Godfather-like Capa Barsavi, the clever spymaster known only as the “Spider”, and every character Locke and Jean play in their schemes—are interesting, with each scene adding a new layer of depth to them in unexpected ways.

The first pages are dark (they start off with two old men talking about having to slit children’s throats), but if you can get past them, you will find yourself drawn into a world like no other with characters and plots that will keep you reading to the very last page!